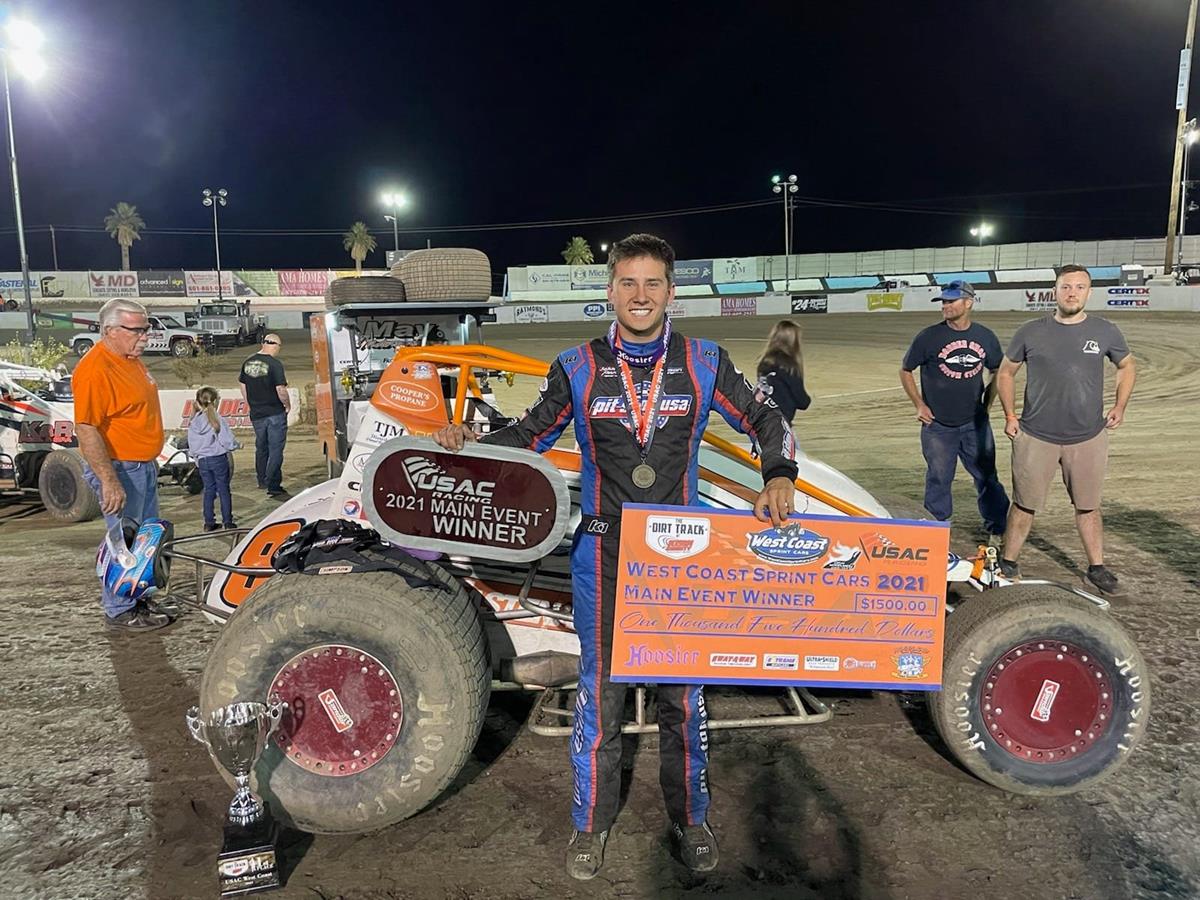 Inside Line Promotions – BAKERSFIELD, Calif. (Sept. 20, 2021) – Chase Johnson accomplished a new feat last weekend as he won all three features he competed in during a 26-hour period.

Momentum is clearly on Johnson’s side as he is set to make his USAC Silver Crown debut this weekend at Eldora Speedway near Rossburg, Ohio, during the Four Crown Nationals. He will qualify in a Goodnight Racing entry on Friday before the race on Saturday.

“I think this is our fourth or fifth attempt at running this car for the first time,” he said. “We’ve had bad weather and misfortune along the way, but I’m excited to turn some laps for the first time and to do so at Eldora Speedway is a dream.”

Last weekend marked the most wins Johnson has earned in that short of time and pushed his season win total to eight victories, including four in his last five starts.

“It was pretty awesome,” he said. “To do it both nights in the sprint car and to double down on Sunday was pretty cool. Missing the first half of the night and tagging the back of the field in the main on Saturday was cool to do as well. Then to cap the weekend by getting the job done in the midget, which was a pretty good show, was awesome. There was good money on the line and good cars so to knock that one off was pretty sweet.”

The two tracks are approximately 20 minutes apart and Johnson took advantage of a unique opportunity to arrive just in time for heat races at Bakersfield Speedway.

“I had to work all day so a huge thank you goes to Jayson May and Cooper’s Propane,” he said. “They are the ones who made the flight possible for me to get to the track.”

Johnson advanced from seventh to fourth place in his heat race at Bakersfield Speedway. However, since he missed qualifying he was relegated to the back of the field – 14th – for the A Main.

“I think we got the lead on Lap 15,” he said. “There were yellows that made my job easier, but I was happy that we were able to pass most of the guys and people dropping out didn’t give us a lot of spots. I knew I had to be patient to get by all those guys, but at the same time you have to be aggressive to get the job done quickly because we had to start so far back.

“We went from third to first on a mid-race restart. I drove around the second-place guy on the outside of turns one and two and I slid the leader down in turns three and four. It was pretty much smooth sailing from there and we won by a straightaway and a corner.”

Johnson was just as successful in the non-wing sprint car on Sunday at Kern County Raceway Park, where he set quick time during qualifying before advancing from sixth to third place in a heat race and from fourth to win the main event.

“It played out really good,” he said. “Starting fourth wasn’t nearly as bad as the night before. I think we got the lead around Lap 4 or Lap 5. I knew once I got the lead I could control the pace of the race. I went in a little bit of a cruise mode to make sure I didn’t make any mistakes.”

Johnson’s night in a midget was efficient as well. He timed in third quick during qualifying before gaining a spot to place fourth in a heat race. Johnson capped the night by rallying from sixth to win the feature.

“We qualified well and took the heat race as we could get it,” he said. “That put us in a good spot to contend in the A Main. We started sixth and got up to third somewhat quickly. I was able to keep moving forward. I think we took the lead around Lap 10. It was a great night every time we hit the track.

“I want to thank everyone with May Motorsports and Six8 Motorsports for the opportunities. I’m grateful that we could make the most of them by winning every feature.”

Friday and Saturday at Eldora Speedway near Rossburg, Ohio, for the Four Crown Nationals