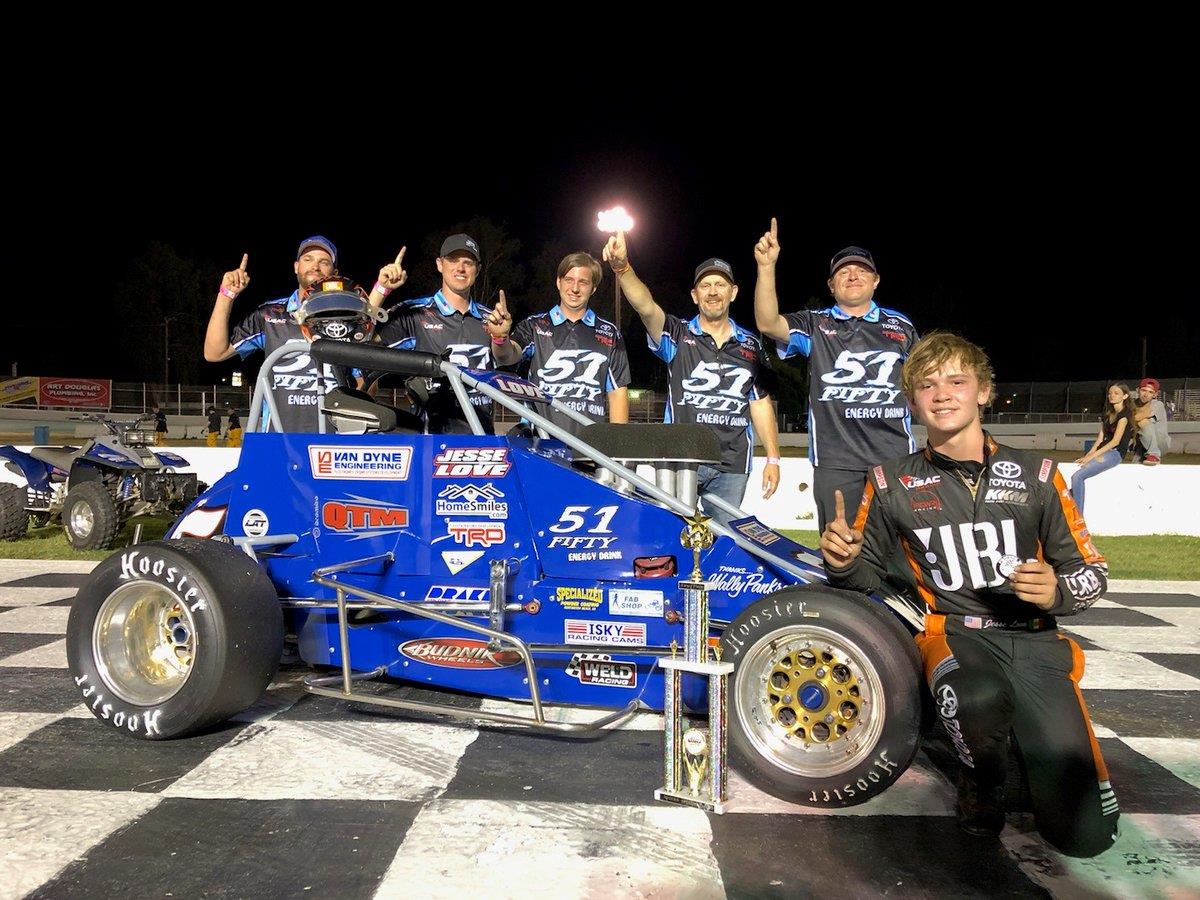 Love laid down the fastest lap in time trials with a blazing lap of 13.907 seconds around the paved 1/3-mile in the 51 Fifty Energy Drink sponsored Van Dyne Engineering midget to edge out Jerome Rodela in his Trench Shoring-sponsored machine who posted a best lap of 13.997 seconds.

Maliepaard and Carson were both able to affect repairs and joined the tail of the heat race line-up, but before the field could take the green flag to start the race, Ms. Bredinger’s #8 machine, scheduled to start on the pole position, encountered mechanical gremlins with its Honda engine and pulled off the track. Annie’s misfortune moved Cody Gerhardt to the pole position with Goodwill alongside for the start of the 8-lap heat race.

Cody led the first circuit, before Rodela passed him for the lead of lap two. Meanwhile, Love maneuvered into third place from his fifth starting position. On lap three, Love moved past Gerhardt into second place, but over the final laps, Jesse could not close the gap on the fleet Rodela machine. The finishing order was Rodela, Love, Gerhardt, Goodwill, Nobile, Maliepaard, Prickett, Williams and Carson.

The 17th annual Gerhardt Classic was the final event of a full evening of racing, and the field took the green flag in row of two in lieu of the traditional three-wide start, with Rodela and Love on the front row with teammates Gerhardt and Nobile in the second row. Unfortunately, the field was only comprised of nine cars, as despite the valiant efforts by the crew led by her father, Annie Bredinger’s #8 could not make the starting call.

After the field was introduced to the crowd and the drivers and crew members threw frisbees to the grandstand crowd, the field rolled away and lined up for the start. At the drop of the green flag, Rodela shot into the lead with Love close behind. By lap five, current points leader Carson retired to the infield, and a few laps later, Goodwill began to pressure Maliepaard for fifth place as the engine in Mark’s car went off-song. On lap 15, Goodwill completed the pass and Maliepaard retired his #51 Fit & Finish Hot Rod Interiors Special to the infield. Meanwhile Gerhardt continued to race in third place with Nobile never more than a car length behind him and constantly looking for a way past.

On lap 35 of the 50-lap feature, Love closed to the rear nerf bar of Rodela’s #25 and on lap 37 Jesse made a move underneath Jerome entering turn three but could not make the move stick. Three laps later, as the pair entered turn one, Love made a move to the low side, but the blue #5 slid sideways to a stop in the grass inside turn two which brought out the race’s first caution flag. Once he restarted the Tres Van Dyne owned #5, Jesse rejoined the field in in fourth place.

When the green flag flew again, it was clear that Jerome Rodela’s car had a mechanical problem, as he was off the pace and dropped to third place as Nobile charged to the lead followed by Love in second place. On lap 44, Rodela rolled his immaculate Toyota-powered maroon #25 to a stop at the end of the front stretch which brought out another caution flag as the Madera track crew pushed Jerome to safety in the infield.

As the field rode under the caution flag, the running order was Nobile, Love, Gerhardt, Goodwill, Prickett and Williams. When the green flag re-emerged, Jesse Love hounded Nobile for the lead until he made the winning move on the inside of turns one and two on lap 46 and drove away to win by .459 seconds over Dylan Nobile, with Cody Gerhardt third. David Goodwill finished fourth one lap behind the leaders with David Prickett fifth two laps behind and JR Williams in sixth place. Among the non-finishers the official order was Rodela, Maliepaard, and Carson, and Annie Breidnger who did not start the feature.

The POWRi BCRA midgets will be back in action on the pavement on Saturday August 3 at Evergreen Speedway located on the Evergreen State Fairgrounds in Monroe Washington for the Rory Price Memorial presented by Bardahl. The race co-sanctioned with the Washington Midget Racing Association (WMRA), held since 2006 honors the memory of Rory Price, who raced midgets and sprint cars with the WMRA, BCRA, USAC, and NSRA clubs. In addition to the POWRi BCRA and WMRA midgets, the program will feature late model stock cars, outlaw figure 8’s and the Hornets class.

One week later, on August 10th, the pavement midgets will be joined by the vintage division at the new Stockton 99 Speedway for the Tom Manning Memorial Race. In addition to the POWRi BCRA midgets, the program will include the Gun Slingers Wing Sprint Car Series, Legends of Kearney Bowl, Focus Midgets, and the Mini Cup class.